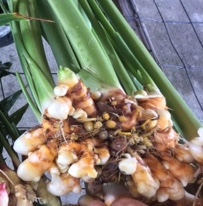 Turmeric is a wonder-root! It is a powerful anti-inflammatory that aids in digestion and body aches and pains. In Southeast Asia, it is woven into the daily diet to keep folks in good health. To unleash all its goodness, it should always be eaten with some black pepper and a healthy fat (olive oil, coconut oil, butter or ghee, etc). Slice it thinly or mince it and add it to smoothies, soups, stir-fries, and curries. Make a winter tonic of Fire Cider or a delicious pot of Golden Milk (see recipes below).

This is a very common spice used in Indian cuisine to give curry its beautiful yellow coloring. It stains very easily, so make sure not to get it on your clothes. Its taste is described as mild peppery to warm and bitter while its fragrance is sweet and pleasant, slightly reminiscent of a mix of orange-zest and ginger to which it is related. Once harvested, the root is boiled, dried, and ground to prepare distinctive bright yellow spice powder.


STORAGE: Turmeric roots keep in a bag in your fridge for several weeks. To preserve it for the winter, slice it thinly and add to honey and leave it on your counter. It will keep for months this way. Or, you can always freeze it for a year or longer.

Fire cider is a vinegar infusion that helps support the immune system during the colder months of the year. Every year around this time, we make a big batch of fire cider. Whenever we feel a little under the weather, we take a swig and feel better straight away. It also makes wonderful gifts.

Put ginger, horseradish, onion, garlic, peppers, lemon zest, lemon juice, rosemary and turmeric in a quart canning jar. Cover with apple cider vinegar by about two inches. Use a piece of natural parchment paper or wax paper under the lid to keep the vinegar from touching the metal. Shake well. Store in a dark, cool place for one month and shake daily.

After one month, use cheesecloth to strain out the pulp, pouring the vinegar into a clean jar. Be sure to squeeze as much of the liquid goodness as you can from the pulp while straining. Add ¼ cup of honey and stir until incorporated. Taste your cider and add another ¼ cup until you reach desired sweetness. Fire cider should taste hot, spicy and sweet. It is great as a winter time tonic and as a remedy for colds and coughs. You can also use it in salad dressings, on rice, or with steamed vegetables.

This is a TTCF staff favorite for chilly nights. It's delicious enough to be considered dessert yet also nourishing and a good way to stay healthy during the cooler months of the year.

Take advantage of turmeric and ginger season and freeze some of both so you can make golden milk all winter long. Double or triple the recipe so there's enough to share or save for the next day.

Whisk milk, cinnamon stick, turmeric, ginger, honey, coconut oil, peppercorns and 1 cup water in a saucepan. Bring to a low boil. Reduce heat and simmer until flavors have come together and milk has become a beautiful golden color (about 10 minutes or longer). Strain, pour into cups and top with ground cinnamon. Can be made ahead of time and reheated before serving.